The Postmodernism that is Zombie Holocaust

The layers of post-apocalyptic, postmodern irony in pop culture phenomena such as the film Zombie Holocaust are thick and complex.
To being with, the film (directed by Marino Girolami in 1979) is essentially a hybridized imitation of a hybridized imitation. Holocaust was shot immediately following the surprise success of Lucio Fulci’s Zombi 2, which itself was an “unauthorized sequel” to Dawn of the Dead. Zombi 2 mixed Romero’s new zombie ideas with the aesthetic of the Italian westerns of the 1960s and 1970s. Holocaust then took Zombi 2 and grafted it to the "cannibal film" genre of the later 1970s. If that was not enough, a portion of an unfinished domestic horror film was stitched to the beginning of Holocaust, to give it more of an “American” context.

Like many such films of the era, this is as close to outsider art as professional motion picture production can get. The story follows its own, internal logic; the make-up effects are wonderfully abstract, imaginative, and entirely inept; and the general tone seems primitive and obscure. 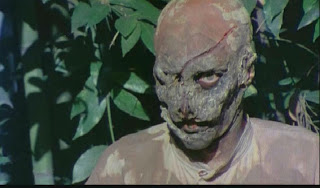 Like most films of the time, Zombi Holocaust played to limited audiences in urban “grindhouse” theaters before dying a quick death. Then, by the late 1990s, this and other films were resurrected as hip, ironic artifacts from a lost age. DVDs were released, ad art became collectible, and now, a new generation of artists is mimicking the apocalyptic aesthetic of the 1970s and early 1980s. Limited edition posters are printed for single screenings, or just for the sake of what is a complex, culturally-reflective art form.

Posted by Afterdays Media at 1:56 PM