The Opiate that is Irony 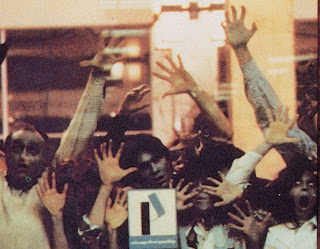 Irony is one of the core attractions in the explorations of contemporary ruin and abandonment, such as those found in this blog. However, those images and posts (as well as the books and music promoted by Afterdays Media), may be reflections of the irony of another era. I realized this today while reading Christy Wampole’s excellent essay in the New York Times. How to Live Without Irony speaks with remarkable clarity and insight into the sadly shallow, insincere, and rather corrosive stance that irony has taken within Generation Y hipster culture since the 1990s.

Born at the dawn of Generation X, I became culturally conscious during the early 1970s, and I see now that I may have experienced an early form of  “proto-irony” during the waning years of the Cold War. It was clearly of a different flavor than that described by Wampole. Our first tastes of irony were wistful, self-reflective ones. Imagining of the end of us, and the nature of our own ruins. And it wasn't hip. We were weird. 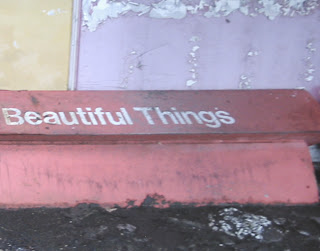 I wrote about this in my recent book about the early years of the American zombie phenomena:

“Dawn of the Dead was a peculiar product of a peculiar time and place. In the audience, we recognized something astonishingly relevant about colorful corpses decomposing in J.C. Pennys. These ideas taught me, at an early age, to imagine the sudden decay of my own culture. They introduced the irony present in much of my daily life, when considered in the past tense”.

The late 1970s and early ‘80s may have been the time when Warhol and postmodernism finally trickled down from art and literature. The widespread act of stepping out of one's own pop culture to see it from another perspective. That sense of disassociation is crucial to the kind of irony that is endemic in mainstream culture today. Always self-referential. As Wampole puts it, today’s hipster is a “walking citation”.

But at the time, this dislocated perspective was imposed upon our imaginations by, among other things, the popular depictions of worldwide annihilation of one form or another. Dawn of the Dead was a good ironic laugh, perhaps one of the first of its kind, but that irony was simply a sugarcoating atop a much more contemplative and horrifying product in 1979:

“For decades, the Cold War had warned of the coming apocalypse, and that ours might be the next civilization to fall. The vacant and breached Monroeville Mall, filled with melancholic irony and surrounded by walking sculptures of exotic, post nuclear decay, was a genuinely compelling idea to many of us in 1979. Its timing was perfect.”

It was also sad, and still scary at the time. Zombies weren't yet jokes -  they were just extreme examples of a sense of inevitable collapse that we just could not shake. It’s different today. Most cultural memes now come with a smirk, but I don’t remember smirking that much back then. What I do remember is the ocean of self-realization that washed over us as those zombies tumbled down the escalators. And I also remember the strange comfort we later found exploring dead shopping centers and drive-in theaters. It propelled me into the field of archaeology, and I cant help but think it made me a more cautious consumer.

"Prying off plywood sheeting that covered the glass doors, we found that cosmetic suburban architecture, when left unattended for only a short time, becomes ancient. The damaged interior of the concession stand was heavily infested with the contemporary melancholy that attracted us to these places. Our shoes crunched across foil bags that still smiled CHEESEBURGER into the darkened, mildewed space. Our hands sifted through a stainless steel bin filled with unpopped popcorn. We wandered through a projection room littered with bird droppings and hundreds of feet of film, still picturing dancing hot dogs and a hand endlessly reaching for a French fry".

Perhaps irony is like any good drug: the right amount affords mind expansion, and too much overwhelms the system.

Be sure to read the essay. 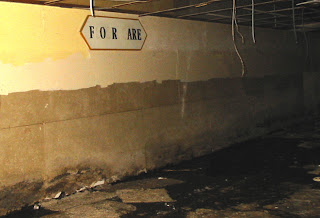 Posted by Afterdays Media at 11:12 AM No comments: 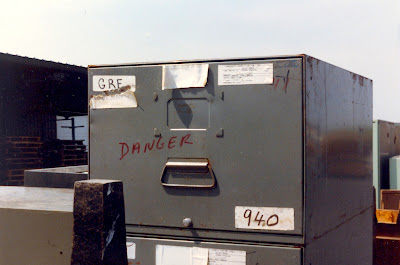 Posted by Afterdays Media at 5:31 PM No comments:

Email ThisBlogThis!Share to TwitterShare to FacebookShare to Pinterest
Labels: abandonment 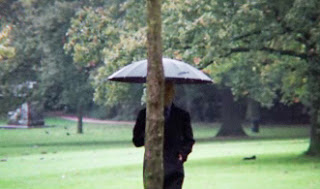 This blog focuses on the consideration of our own culture in the past tense. It is basically relevant to extend the time frame in question back to the early years of the industrial and consumer revolution, sometime in the early 1700s. The beginnings of the western culture that we know today. That brings me to my day job as an historical archaeologist. 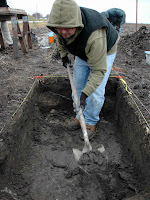 In that job, we are assigned to interpret the meanings and circumstances behind the ruins and artifacts left in the ground by people long dead. There is an implied “resurrection” of sorts – of some aspect of architecture, material surroundings, or daily life. We follow rules of empiricism and logic, and we tell ourselves that we build conclusions based on observable facts. 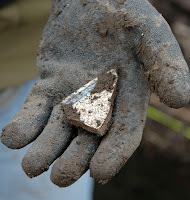 Well, yes and no.


We do manage to sketch some pretty remarkable outlines of past places, events and lifetimes. And we can say a few things with a certain degree of authority. Some amazing things, actually. But we are constantly on shaky ground, due to the natural laws of decay and fragile memory. We must bridge the gaps of decomposition and forgetting with certain assumptions, often based on Occam's Razor, which states that the simplest explanation is usually the correct one.

This brings us to the Umbrella Man, a short film by Errol Morris. On the surface, it is about a strange character seen at the site of Kennedy’s assassination. But what it is really about is the potential for seemly nonsensical factors behind any historical circumstance. Once you look too close - when you really attempt to read each detail  - probability, predictability, and Occam's Razor itself may fall apart. This perspective can threaten to make a monkey out of any historical or archaeological study.

This cuts to the heart of the theme of abandonment and decay present on this and so many other blogs. The suggestions made by patina, and by the gulf between what happened and what we bring to the remains of what happened. That is the fun part.

Posted by Afterdays Media at 6:27 AM No comments: