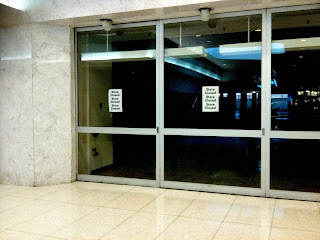 The various ironies of dead shopping malls have been well documented over the last ten years, as a number of the larger enclosed centers have failed and the popular interest in things-abandoned has grown. In this post, I wanted to show another aspect of suburban decline. 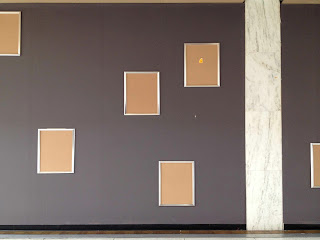 For decades, artists, their studios, and the galleries that show their work have sought low-rent neighborhoods in the cities in which to work. As a result, the vibrant, active communities that often follow have served to revitalize dying sections of the urban landscape. In nearly all cases, however, the long-term benefit is enjoyed by real estate developers who convert neighborhoods “colonized” by art and artists into upscale residential and retail spaces. The end result is most often the displacement of the very people (and the ideas) that reshaped the districts, and the replacement of locally-owned businesses with corporate outlets. The story is an old chestnut now. The burned-out building becomes an art gallery, and then the art gallery becomes a Starbucks. 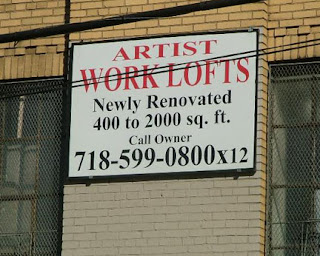 Not surprisingly, developers in the suburbs have watched this process, and have attempted to transplant the phenomenon in a few places where economic rot has crept into post-World War II communities. One example is Crestwood Mall in suburban St. Louis. What had begun as a post-war strip mall had become a sprawling enclosed shopping center by the 1980s, only to become a suburban ghost town by the first years of the twenty-first century. 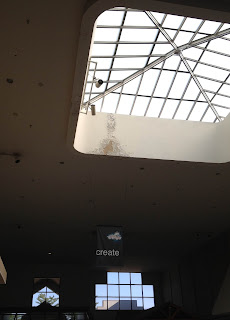 After occupancy fell below 50%, artists were invited into the big climate-controlled space, and suddenly, what was once The Foot Locker was a dance studio, what was once Waldenbooks was a community theater, and what was a jewelry store became the site of an installational sculpture. For a couple of years, the mall was transformed by the eclectic – something not generally seen in such environments. It couldn’t last, however. Within a few years, the leases of art-tenants were terminated, and the big place was emptied. Word has it the mall will return to its mid-twentieth century roots as an outdoor strip mall.


Posted by Afterdays Media at 7:18 PM No comments: