During the 1970s and 1980s, a number of movie theaters sprouted up along the edges of small towns in the Midwest – towns that were too small for “suburbs”. These theaters were usually quite unremarkable utilitarian structures, in concrete block or pre-fabricated steel. Before the widespread appearance of cable television in the rural areas, and also before the appearance of affordable home video, the places served as bunker-like outposts for mainstream popular cinema. They were all together different than their ancestral movie houses found in urban areas since the early twentieth century. They were also untethered from the pavement-and-box landscape of the suburbs. 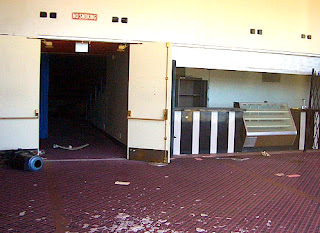 Big, air-conditioned barns, decorated like the waiting room of a car dealership, stocked with candy and fountain drinks, providing a rural community with a connection to the new summer blockbusters imported from Los Angeles.The urban movie theaters closed first. Then the outdoor Drive-in theaters. Finally these rural movie-bunkers succumbed to cable TV and home VHS. 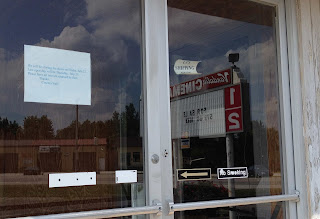 This example (above and top), in rural Missouri was converted to the very thing that lead to its demise – a video rental shop. Now, with tape and DVD rental becoming anachronistic, the media outpost has nothing left to offer.

Posted by Afterdays Media at 12:59 PM